What can digital dentistry do for you? We use several types of technology to make your visits more comfortable and efficient. These tools also ensure greater precision and more natural-looking, longer-lasting results.

Dr. Kofford is a board-certified prosthodontist who specializes in restoring and replacing damaged or lost teeth. After graduating from Brigham Young University, he attended dental school with the help of a U.S. Air Force Scholarship and became a doctor of dental surgery (DDS). He was later accepted into the Air Force's prestigious prosthodontics residency program, where he received extensive training from talented clinicians.

In 2011, he presented his advanced prosthodontics training to the American Board of Prosthodontists and became board certified. After completing his residency, he earned his Masters of Science Degree at the University of Texas Health Sciences Center and moved to Suffolk, England, with his family to serve as the Director of Prosthodontics and Base Dental Laboratory Flight Commander. Together with his wife and six children, he eventually made the decision to move back to the United States and joined Dr. Karen Bruggers at her Cary, NC, dental practice.

Dr. Kevin Lim spent his childhood years being raised between the Philippines and Vancouver, British Columbia, Canada. He earned his BS in biological sciences at the University of California in Irvine, and his doctorate in dental medicine from the University of Pennsylvania. He spent an additional two years in Philadelphia at Einstein Medical Center completing a hospital-based general practice residency, which included an additional chief residency year. In 2014, Dr. Lim moved to North Carolina where he completed his certificate and master’s degree in prosthodontics at the University of North Carolina Adams School of Dentistry in Chapel Hill followed by an additional fellowship in oral implantology.

From 2018 to 2019, Dr. Lim served as full-time clinical assistant professor in the prosthodontic section of the Division of Comprehensive Oral Health at the University of North Carolina Adams School of Dentistry in Chapel Hill, where he was heavily involved in the predoctoral implant curriculum and the graduate prosthodontics training program. In addition to being the newest prosthodontist at Cary Prosthodontics, Dr. Lim still serves as an adjunct assistant professor at the UNC-Adams School of Dentistry. His interest lies in the utilization of digital workflows in planning and executing full mouth rehabilitations to ensure greater treatment predictability and satisfaction for patients.

"I don't just help your mouth look better, my goal is to ensure your mouth feels and functions better too! Think of me as the architect for your beautiful smile." Dr. Kofford

A Dental Practice with over Two Decades of Tradition

Cary Prosthodontics was founded in 1991 by Karen Bruggers, DDS. After a very successful career treating patients in her full-time private practice, Dr. Bruggers decided to retire from private practice and return to teaching at Louisiana State University. In January 2016, Dr. Bruggers approached Dr. Brandon Kofford, who was also practicing prosthodontics in Cary, and asked him if he would be interested in assuming stewardship for her prosthodontics practice.

Dr. Kofford gave her an unequivocal "Yes!"  and joined the practice in November 2016. Dr. Bruggers and Dr. Kofford are kindred spirits and share treatment philosophies and a common culture of compassion and excellence. We invite you to get to know who we are as a team, as well as who we are as individuals. After all, contrary to popular misconception, prosthodontists are people too!

Learn More about Our Office

Take a Look Inside Our Office

What Sets Us Apart from Other Dentists

Unlike a general dentist, a prosthodontist has received three years of additional training in treating complex dental issues such as missing teeth. By combining advanced training, the latest materials, and a personalized treatment plan, a prosthodontist can deliver an end result that is both highly cosmetic and incredibly functional.

Our prosthodontic practice owns some of the most advanced technology in Cary, NC. We use the latest software, scanners, 3D printers, and milling units to create custom restorations faster than ever before. Thanks to our office's state-of-the-art tools, patients can enjoy a healthy, fully functioning smile in fewer appointments.

Many patients dread going to the dentist, but our patients love us! Our Cary, NC, office gas received over 100 five-star reviews from patients on Google, HealthGrades, Facebook, PatientConnect365, and Vitals. If you need advanced prosthodontic care, our office can provide a pleasant, efficient, and calming experience.

Their own smiles confirm that their customer's satisfaction is paramount and their work is impeccable! I would highly recommend their services to anyone. I had an emergency broken appliance and they got me in quickly and did the work while I waited. Superb work - going above and beyond what they needed to do! Their pricing is also reasonable. They all are warm and have a sense of humor - very down-to-earth!

Cary Prosthodontics is a wonderful experience. They make you feel like family. I actually look forward to going there. They are painless, patient, kind and concerned. I received upper and lower dentures and needed no adjustments or adhesive. I can eat anything in comfort. I never thought that I would be so happy to go to the dentist. They are the best beyond compare.

Ready to Rehabilitate Your Smile? Schedule an Appointment with Drs. Kofford and Lim Today

Tired of suffering from limitations in how you eat, speak, or smile because of missing or damaged teeth? We can help. At our Cary, NC, dental practice, you receive:

Want to refer your patient to Cary Prosthodontics? Just complete this form. Thank you for trust in us! 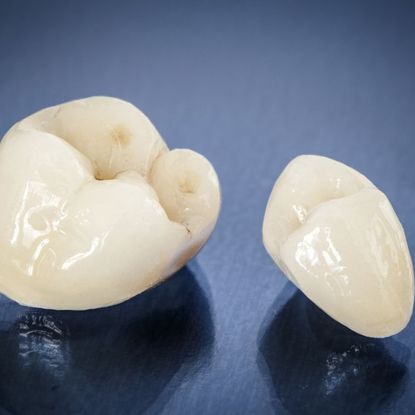 Dental crowns completely cover a damaged, broken, or badly decayed tooth, improving the look and health of your smile. Patients with a single missing tooth can choose an implant-supported crown to fill gaps without altering surrounding teeth. Our Cary, NC, office uses a Versamill 5X by Axsys Dental Solutions to craft lifelike, sturdy zirconia restorations in one appointment.

Veneers are wafer-thin porcelain restorations that cover the front surface of the tooth, concealing cosmetic imperfections like chips, cracks, permanent discoloration, or unevenly shaped teeth. Our office uses the latest materials to craft extremely natural-looking veneers that closely mimic the shine, color, and texture of your surrounding teeth, helping you achieve a stunning, symmetrical smile. 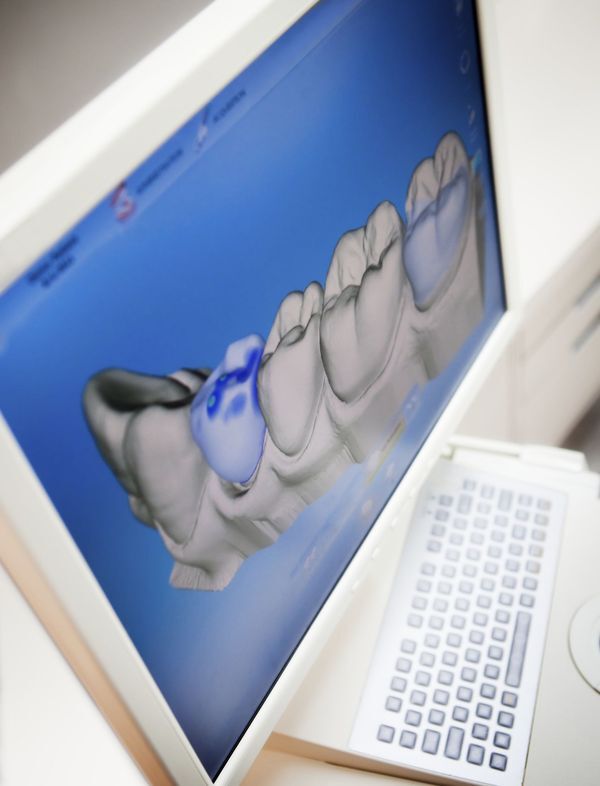 We use advanced dental software to digitally design crowns, bridges, and dentures. We can also digitize any model and make modifications using our software for a more precise fit. Our digital capabilities also help us plan your dental implant surgery so we can ensure more precise placement and reduce the likelihood of human error.

Implants are the only way to truly replace missing teeth from the root to the crown. These titanium posts are incredibly sturdy and can last a lifetime with proper care. Unlike traditional methods of tooth replacement, implants stimulate the jawbone and prevent bone recession, helping to maintain your facial features.

Patients who are missing most or all of their teeth can restore function and beauty to their smiles with custom dentures. Dr. Kofford developed his own three-visit protocol to help patients receive their dentures in just five days. Because we save digital versions of our denture designs, we can more easily provide a replacement in the event of an accident.

Do your removable dentures ever slip, click, or slide out of place? If so, it may be time to upgrade to implant-supported dentures. These restorations attach to your dental implants, eliminating the need for messy adhesives. In addition to looking and feeling more natural, they also provide jawbone stimulation and prevent premature aging of your facial features.

The American Dental Association recognizes prosthodontics as an official specialty for dentists. While most dentists can provide basic preventative and general dental care, prosthodontists receive three years of additional education and are specially trained in solutions including dental crowns, dental bridges, veneers, inlays and onlays, dentures, and dental implant placement. Prosthodontists combine their training in cosmetics with a broader understanding of restorative dentistry to deliver highly aesthetic restorations that are customized to your individual smile. By visiting a board-certified prosthodontist, you are getting the best possible care for broken, damaged, or missing teeth.

"During my clinical time in dental school, I saw complex problems that only a Prosthodontist would know how to solve. It was then that I realized in order to treat any case to the highest quality and bring beauty to any smile, that I would need to become a Prosthodontist."

Loved by Patients Throughout Cary, NC

I have been a RN for 32 years and feel I’m a good judge of professionalism. Dr. Kofford and the office staff all are professional and they have a way of making you feel like family. Also I am a very complicated case for I have had 6 surgeries in the past. Dr. Kofford and staff worked relentlessly until everything was perfect. I highly recommend them to all.

How Was Your Experience?

We are constantly striving to improve our services. Feel free to leave a review or rating and let us know how we can better serve our community.

Cary Prosthodontics was founded in 1991 to provide the finest care to the residents of the community of Cary, NC. Our compassionate and caring prosthodontists are members of a number of professional associations, including:

For more information about our services, contact our practice online or call (919) 276-0555 to speak to a member of our team today.

Friday and Saturday: Appointment Only

*Disclaimer: results are not guaranteed, may not be permanent, and can vary per individual. Some images are of models, not actual patients.

Friday and Saturday: Appointment Only